Stage 1 of the Sir Keith Park Memorial at the Thames Airfield is a full sized replica of a World War Two Hurricane Fighter, displayed in Sir Keith’s personalised Battle of Britain battle colours. His designation in this campaign was “OK 1”. (Later, when commanding air operations in Malta, he flew another Hurricane designated “OK 2”).

Our replica Hurricane was erected a mere four days before the Battle of Britain 2020 Commemorations – the 80th Anniversary of the famous air battle. Huge signs of relief all round!!

The value of works to that point was in the order of $220,000. Of this, the principal sponsors and cash donors were Michael and Christine Kemp of Waeranga in the Waikato. Michael has written a book about his time through the Battle of Britain when he lived in Cleadon, Sutherland, County Durham at age three at the time when Sir Keith was commanding Group 11 fighters in the Battle of Britain.

The balance of funding was from a diverse number of cash donors, and significantly over a third of the total cost came from goods and services from local Thames and Kopu businesses. What an amazing effort! The names of donors are posted at the Thames Airfield alongside the Hurricane.

The Hurricane was ordered from GB Replica’s in Norfolk, UK late 2019. GB Replica’s had previously made a similar Hurricane for MOTAT in Auckland, and MOTAT themselves were extremely helpful in supporting us to get the project completed on time.

Contact was made with GB Replicas in February 2020 for a progress update and photos. The reply from Norfolk was that . . “the Hurricane has been finished and is ready for shipment” !! The response from Thames was . . “bother, we don’t have the funds yet” . . !!  However, all was resolved, the funds were transmitted and the Hurricane duly arrived in Thames. 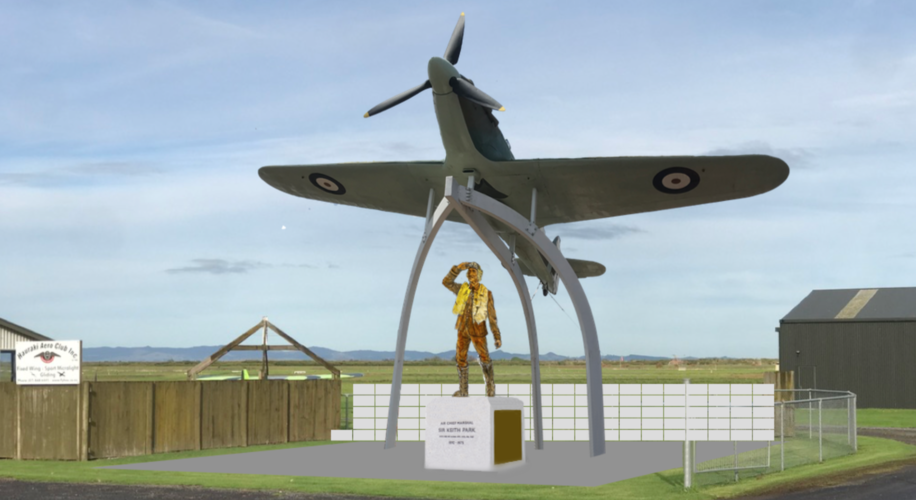